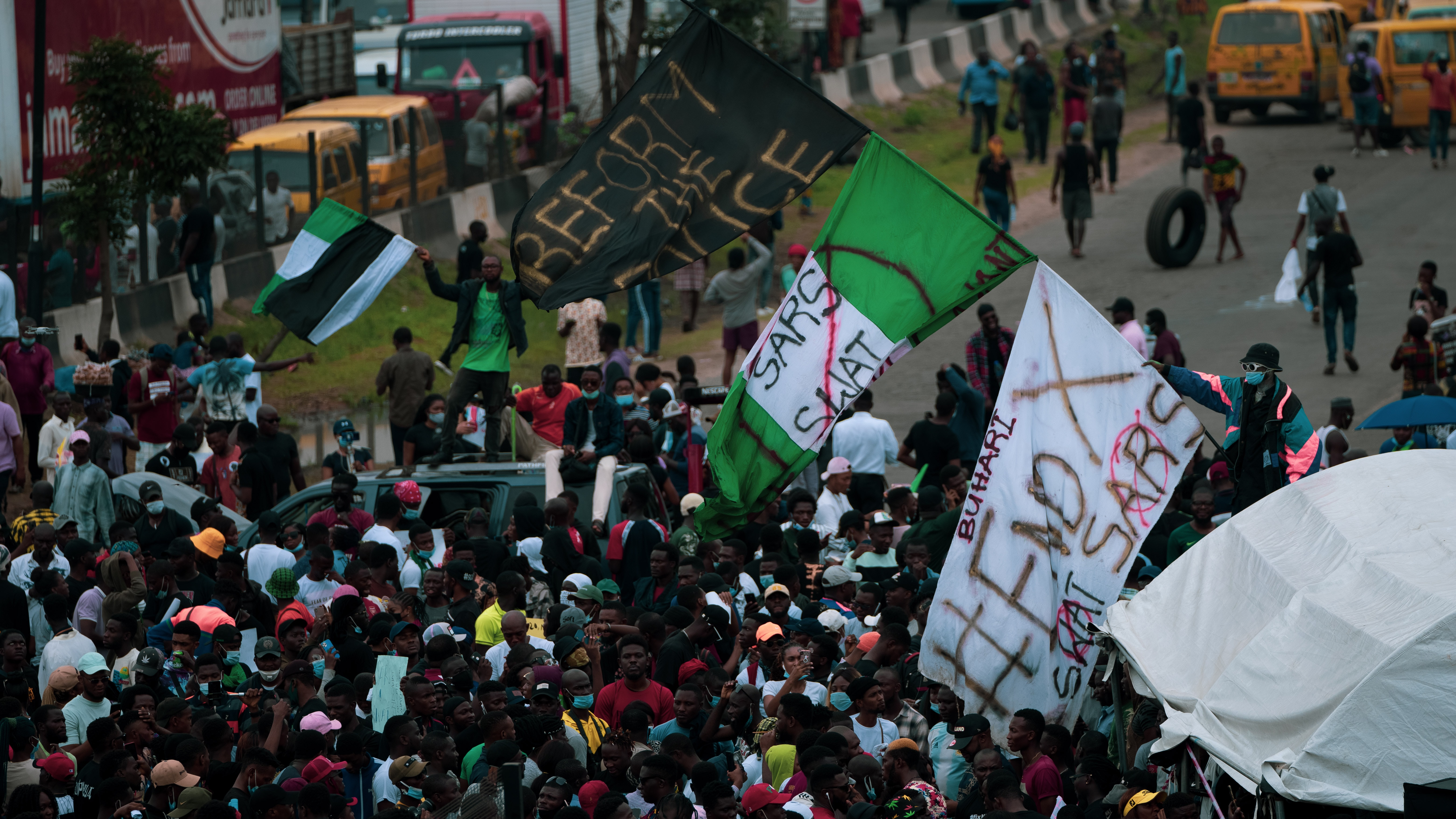 Rights Enforcement and Public Law Centre After the ENDSARS Protests

For about two weeks in October 2020, young people across Nigeria marched in protest against police brutality, corruption and impunity. Termed the ‘EndSARS’ protest, the street protests started in Lagos and quickly spread to all the regions of Nigeria. Though primarily focused on the abuse of young people by the Special Anti-Robbery Squad (SARS), the protests quickly began to portray a general dissatisfaction with bad governance, social inequalities and economic deprivations of citizens. The dissatisfaction of the youth was couched in a 5-point demand which focused on policing and justice for victims of police abuse:

Nigeria’s government responded by initially refusing to consider the 5-point demand then later announced the scrapping of SARS. Several states announced the setting up of judicial panels of enquiry. The protesters refused to leave the streets and the police tried to dispel them by firing tear gas, water cannons, beatings and shootings. On the 20th of October 2020, the Lagos state government announced a curfew which was to begin at 4pm on the same day. At about 7pm, the Army was seen around one of the main protest points at the Lekki toll gate. A large number of protesters refused to leave the vicinity of the Lekki toll gate. Video recordings and pictures show the protesters sitting, singing and generally conducting themselves in a peaceful manner. At about 7.30pm, shots were heard being fired; a stampede ensued and the protesters dispersed though some of them continued to post videos of fleeing and injured protesters.

Allegations have been levelled against the Army; accusing them of killing between 2 and 10 protesters. On the 21st of October 2020, the curfew was effectively in place. News media like Channels and AIT; and Social media feeds continued to carry news of alleged injury and killings at the Lekki Toll gate by the Army. By late morning on 21st October, looters had taken to the streets; stealing, breaking into shops and burning business premises, police stations and courts. The looters included women, children and young persons. The looters acted with impunity and almost complete freedom without any response from security or law enforcement agency. In Lagos, the looters attempted to invade a few residential estates but were repelled by the estates’ private security guards and the residents themselves. The looters did not identify with the EndSars protest though they attacked some police officers, looted the palace of the Oba of Lagos and sought to attack a residential estate in Lagos because ‘big men and politicians live there’.

Between October and December 2020, there was an uneasy calm in major cities like Lagos. As at January 2021, media reports indicate that all 36 states and the federal capital territory have set up judicial panels of enquiry. The Inspector General of Police has set up another Special squad called the Special Weapons and Tactical Team (SWATT). The main responsibilities of SWATT as set out by the Inspector General of Police are: to respond to armed robbery attacks and crimes involving weapons; carry out rescue operations; and handle criminal matters involving high profile criminals.

In Lagos, over 500 alleged looters have been arrested and detained without access to legal services or to a lawyer. Some of these arrested persons are children. The Police have made at least one attempt to challenge the jurisdiction of the judicial panels of enquiry through the courts. Neither the protesting youth who initiated the EndSARS protest or Social activists seem to put much confidence in the response of government. Civil society organizations have lent their voices in support of the objectives of the ‘EndSARS’ protest.

The position of REPLACE is that the ‘EndSARS’ protest encapsulates decades of advocacy and agitations by organized civil society in Nigeria for greater accountability by criminal justice agencies. The rush by 36 state governments and the federal capital territory to set up panels of enquiry while neglecting existing detainees and suspects who are waiting for commencement or resolution of their cases does not give rise to any confidence that the outcome of these panels will be any different from previous panels.

Based on the premise that enough laws, policies and reform propositions exist, it is of fundamental importance that the ‘EndSARS’ campaign looks at the past to see the fabric of past struggles, past reform efforts, past demands and past recommendations; while looking to the future with a view to adopting actions and strategies in the present that will ultimately lead to building of strong institutions and structures that are the fundamental basis for ensuring accountability and a responsive government in a democratic dispensation.

Sign up to receive advance notice of our impact, testimonials from victims.